As in Yogi State, Kabaddi players are given food stored in toilets, video goes viralTAZAA News 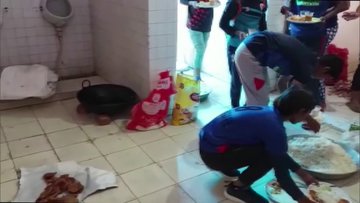 Puber Kalam Web Desk: As much as in the yogic state. Bowls of dal, rice, vegetables on the floor of the toilet. Kabaddi players are getting food from there. As this video spread on social media, there was a firestorm of controversy. A three-day state level U-17 Women’s Kabaddi Tournament was organized at the Saharanpur district stadium in Uttar Pradesh. Where around 200 contestants participated. The Uttar Pradesh government has sacked the district sports officer after a photo of food on the floor of a bath complex at the Dr. Bhimrao Sports Stadium in Saharanpur came to light.

Saharanpur District Judge Akhilesh Singh said irregularities in the food served to players had come to light. As a result, the District Sports Officer, Animesh Saxena, has been fired. An investigation into the matter has been ordered. And there will also be a report in two or three days, he said.

It’s a shame! We cannot provide basic facilities for our athletes, but expect them to win medals for the state/nation. Expect @UPGovt take immediate action and fire the officials responsible for this. https://t.co/wVgqaM1FY4

Most of the participating players said that after cooking in a brick oven, the rice is lifted into a large plate and placed near the bathroom door. There was also a leftover puri on a paper near the rice bowl. Everyone is served lunch from there. One player, who did not want to be identified, said: “A large plate full of rice is brought from the oven and placed in front of the bathroom door. The puri that remains on the side of the plate is placed on a sheet of paper. From there, players can have lunch with rice.”

Uttar Pradesh | An allegation of wrongdoing has been found during a state sports competition in Saharanpur. A related video, purportedly of food being stored in the toilet, is going viral.

On the other hand, after this video went viral, the opposition also single-handedly took on the ruling BJP party. The Congress on its Twitter account wrote that Kabaddi players in UP receive food stored in the toilets. The BJP government earmarked all the money to spend on their false propaganda. But they don’t have the money to provide good facilities for our athletes, this is an outrageous and shameful incident. On the other hand, after the video went viral, Shiv Sena MP Priyanka Chaturvedi also strongly protested this incident, saying, “We cannot provide basic facilities to our athletes, but I hope they are part of the state/nation. to win a medal.” Those involved in this incident should be fired immediately.The Shiv Sena MP shared the video of the entire incident on his Twitter account.