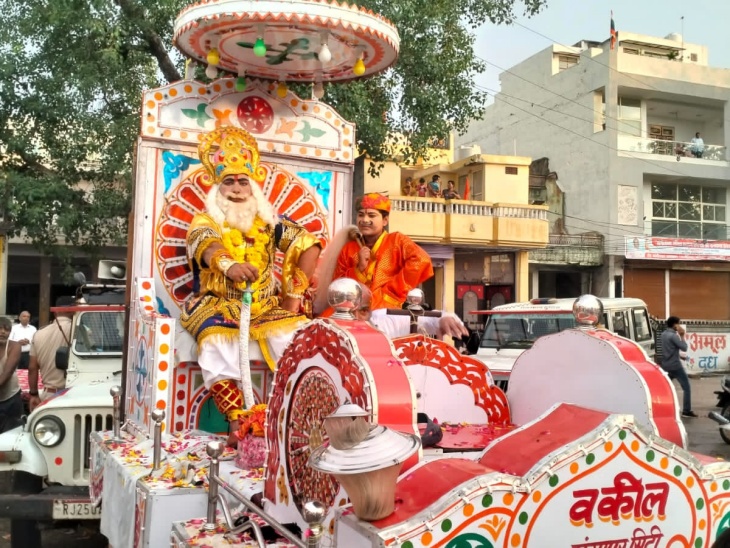 On the birth anniversary of Agrasen Maharaj, a large number of people of the society participated in the procession taken out with attractive tableaux on Monday.

Agrasen Maharaj’s birth anniversary was celebrated with great fervor on Monday. Prabhat Pheri was taken out in the morning and after the flag hoisting and general meeting in the afternoon, a grand procession of Agrasen Maharaj was taken out in the evening amidst the tunes of DJ, bandwagoners, drums and drums. Many attractive live tableaux were also decorated during the yatra. A large number of community members participated in the yatra.

Agrasen Maharaj’s procession was taken out amidst the tunes of DJ, bandwagon, drums and drums.

As part of the Jayanti Mahotsav, a Prabhat Pheri was taken out from the Agarwal Khandelwal Trust at 5:30 am on behalf of the committee. The Mirzapur committee also joined the Prabhat Pheri. After this, the flag hoisting was done by the chief guests at Agarwal Khandelwal Trust, Agrawal Bhawan Trust and Agrawal Educational Institute. A general meeting of Agrawal Samaj was organized at one o’clock in the afternoon, in which the reports of all the organizations of Agrawal Samaj were presented. Along with this, boys and girls participating in the programs organized under the Jayanti Mahotsav were rewarded. Bhamashahs were also honored on this occasion. The service officer’s garland was auctioned in the general meeting. There were hundreds of dignitaries, guests and dignitaries of various units in the general meeting.

welcomed in many places
After the general meeting, at 4:30 pm Agrasen Maharaj’s procession was taken out with full glory, in which horses and attractive floats were decorated. The enthusiastic youths involved in the procession were walking, singing and dancing on the bandwagons and DJs. The people involved in the procession were welcomed by showering flowers at various places along the route and by offering refreshments and snacks. In the old market, traders, led by former MLA Mansingh Gurjar, were welcomed by various organizations including Brahmin society, by showering flowers and by drinking snacks and milk roses etc.

People involved in the grand procession of Agrasen Maharaj taken out in Gangapur City on Monday.