Cipher is still there, not made public due to security risk, Imran Khan TAZAA News 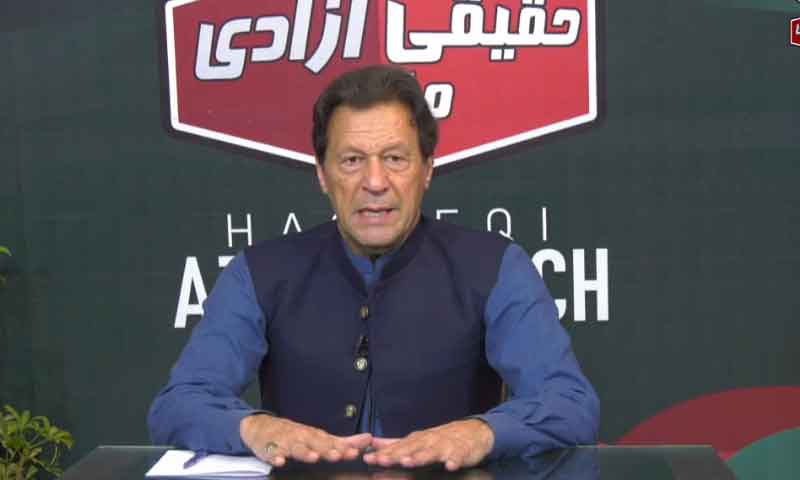 Islamabad: (Web Desk) Former Prime Minister and Pakistan Tehreek-e-Insaf Chairman Imran Khan has said that the President has sent the cipher to the Chief Justice, he should say that it is wrong and we will go to the Assembly the next day. No. Where has she disappeared to? There is only seven days to wait, after that the next course of action will be announced.
These views were expressed by the Chairman of Pakistan Tehreek-e-Insaaf during a special interview with private TV. In this interview, many important issues were discussed including audio leaks, cipher issue, country’s political situation.
The former prime minister while discussing the audio leaks in detail said that the audio leaks is a huge security breach, who is behind it? What is it? I don’t know at all, I must say that it is a matter of national security. If the Prime Minister’s call is being recorded and made public, then it is a risk to national security.
In the conversation regarding the cipher issue, Imran Khan said that whatever things have come up in the cipher, I have mentioned them in the meetings. It came when the OIC meeting was going to be held. Not to be brought up. After placing the cipher matter before the National Security Committee, we made it public. The National Security Committee had decided to de-marsh the cipher. Everyone found out from which country the cipher came?
Chairman PTI said that there is a cipher in which everything is written and it is also with the Chief Justice. The cipher was also sent to the President, the Speaker of the National Assembly, Arif Alvi has sent the cipher to the Chief Justice, let him say it is wrong. The assembly will go the next day. I do not know where the copy of the cipher has disappeared.
He said that in the second meeting of the National Security Committee, Asad Majeed, Pakistan’s ambassador to the US, was also called, on which he said that the cipher is correct, it is said in the cipher that if Imran Khan is removed, we will forgive him and PDM. If they come, we will be happy, the ruling party that is sitting is their product and they are happy.
Imran Khan said that after the imported government came, I was ready that these people will make fake cases against me, so far more than 24 FIRs have been registered against me, all of them are the same, he accused the government that this They will try to put me in jail and even disqualify me, I was ready for all these things, I will say this much about them, there is no democracy and no morality among these people. The long march has been decided, only for seven days. We are waiting, after that we will tell you the next course of action.
Imran Khan said in the interview that the last time I found out that the police were coming, I had prepared a bag. A large number of people reached Bani Gala on the news of the arrest. They did not come to arrest me, I have informed the team that they can arrest me on any pretext.
On a meeting with an important person in the President’s House, he said that I will not speak this question truthfully, I will not speak falsely, ask Ishaq Khakwani for the answer.
Criticizing the government, the former prime minister said that the demand for elections was from those people, when we used to hold sit-ins, we were demanding elections, now they are running away from the elections, I am informing that they will hold these elections when I will be disqualified.
Imran Khan said that the only purpose of these people’s politics is to secure the stolen money, I am in the biggest danger to stop their theft, they know that I will not vote under any circumstances. They kept trying to get NRAO for years, for which they did all kinds of blackmailing, did not allow me to speak in the assembly, did not stop blackmailing the Financial Action Task Force (FATF) too, I warn them. I am standing in the way, I will not accept these opinions in any case.