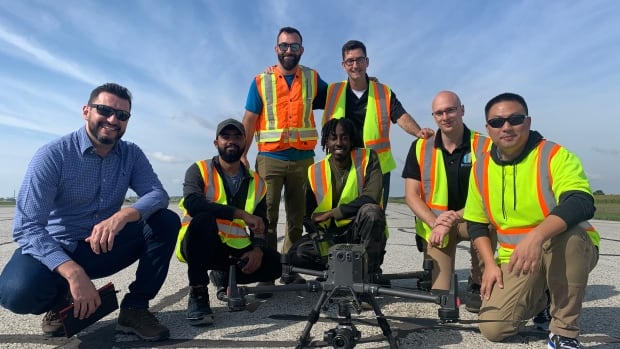 A drone about 30 meters above the ground carried out its first runway inspection at London International Airport on Tuesday morning – a pilot project launched in partnership with Fanshawe College.

Breno Alvarenga, who dreamed up the idea while a student at Fanshawe’s Norton Wolf School of Aviation and Aerospace Technology in 2020, said, “It’s really rewarding. I’m so happy to be here. .”

About two kilometers of runway were closed for the morning while a team of students and faculty from drone inspection firm Fanshawe and Roger collected real-time data for safety auditing, such as cracks, buckling or tilting of the pavement.

“It was built inside the classroom and now it’s out in the real world. It has real application to industry,” said Alvarenga, who worked as an air traffic controller in Brazil before attending Fanshawe. His idea was awarded at the Fanshawe Research and Innovation Day.

“It’s a kind of inspection that used to be done visually by the airport with the use of vehicles and humans, but now with a drone it’s much safer and cheaper,” he said.

Although this is still a pilot project, Alvarenga hopes airport operators will find it effective – saving money and time and improving security.

“I think we’re going to see the drone industry grow,” he said.

Using a drone to inspect a London airport runway

Fanshawe College students and staff use a drone to inspect the runway at London International Airport.

The project brings airport inspection into the digital age

Visual data is collected through photogrammetry, which Debevc describes as thousands of overlapping photos that when stitched together provide one large photo.

It will bring airport inspections “into the digital age” and provide students with “real-world application” of their studies.

“It’s huge. It’s a signature innovative learning experience,” he said. “Students have an opportunity to take what they learn in the classroom and bring it into the field.”

Students will work with the data collected in the classroom, he said.

The opportunity was “beyond expectations” for Fanshawe student Will Su, who worked as an airline pilot in China before joining the program.

They used the knowledge they learned in class to do something innovative to help move the industry forward, he said. Students combined the initial concept and experience and knowledge to carry out the project with the help of faculty.

We planned for a long time in class. “I think we’re doing extraordinary — pioneering things in this industry.”

The London airport is “one of the few in Canada to do this,” said Steve Faulkner, operations manager at London International Airport. “As time goes on, I think you’re going to see more and more.”

Data provides much more detail, which helps with accuracy, long-term management planning and budgeting, he said.

“So far, today, it’s been a resounding success,” Faulkner said.