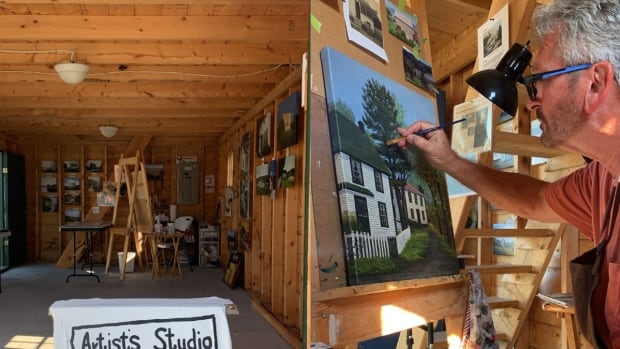 If art could take us back in time, what color would your memory be?

I pondered this question on a leisurely trip to Brigus, on the west side of Conception Bay, on Newfoundland’s Avalon Peninsula. I accidentally stumbled upon David Connelly and his breathtaking artwork.

The invitation to step into the painter’s world was tempting – a welcome sign lining the historic town’s main street, led me into his studio. An artist working on a dreamy canvas. Upon closer inspection, the half-finished painting looked indistinguishable from a high-resolution photograph.

I introduced myself and started the conversation.

David said, “I’ve always wanted to make one [my paintings] Look like a photo.”

When he began to describe an incident at a Toronto outdoor art fair — not long after he began to pursue painting professionally.

“Why is someone selling photos of houses?” Said a passerby.

His solution to the illusion? “When I’m at the show now, I end up getting a sign that says ‘David Connelly Paintings.'”

Besides sheds, barns and fishing stages, I asked him what else he liked to paint.

One look at his paintings shows that he likes to capture rustic and ancient subjects like houses. I asked why he chose to paint them. He said that he was trying to restore the slightly dilapidated house to its former glory.

“It was a beautiful old house, but it was ruined by the windows. So I often restore the house to its original form in my painting.”

David’s journey to becoming a painter par excellence began with a visit to St. Nick.

“What else have I started?” said David, with a hint of excitement in his voice. “I guess it’s my mom, because Santa Claus always brings me paints at Christmas time.”

Growing up in Brigus, art was always a part of his life. Summers are particularly attractive as the picturesque surroundings of Brigus come to life. Rain or shine, teenage David had a scene waiting to be painted every waking moment. He used to turn to art even in moments of pain. Recalling the time he burned his feet, he described how he reached for his paintbrushes instead of medicine.

“It was summer and the only relief I could get was to go to a big river in town and put my foot in it. So I took my paints and put my burnt feet in the river in the afternoon and I just painted. A natural landscape with water and everything.”

David was not always a professional artist. He worked as a social worker for years before retiring at the age of 50. It’s time for him to pursue his dream career. Less than a week after his retirement, he redeemed his parting gift — a course at the Toronto School of Art.

David’s feelings for his hometown came from a special place in his heart.

“I’ve always loved it [Brigus], even as a child, we used to walk around the place and say how much we love each other. We did it as a group of kids. We always thought it was the best place around, you know?”

For Debbie O’Flaherty, David plays a vital role in promoting the town to visitors. 100 of his postcards and some of his originals are sold each year, while the local North Street cafe she runs carries some of his artwork.

“There is history in his paintings,” she said. She says her customers are amazed by their quality.

“People can’t believe the authenticity of his work,” she said. “Are they a photograph?” They ask. There is a lot of detail in his work. Many are happy with his work and it adds a lot to the cafe. It also gives it its character.”

David’s next plan involves coloring his childhood memories of Brigus.

“I have a lot of old photos of Brigus from my childhood and I’m planning to do paintings of them. I’ll have to make some of those in color because they’re black and white – that’s what I have, not just Brigus, but Newfoundland, I think, because I’m always in danger of disappearing. Looking for old houses.”

Although David now resides in Arizona and Toronto, he visits Brigus every summer and immerses himself in his craft of capturing local landscapes and traditional architecture. His artwork made him an unofficial ambassador for Newfoundland.