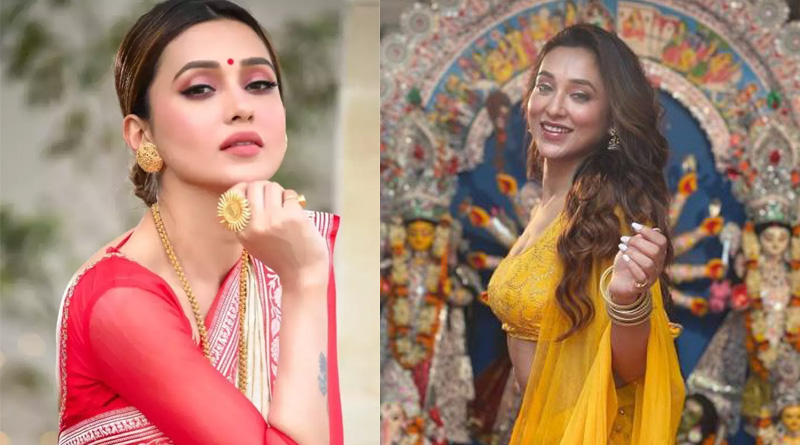 Daily digital news desk: It can be understood that celebrities have tried hard to enjoy the joy of Puja, just by looking at their social media. Almost everyone shared glimpses of Puja’s attire. But when Mimi Chakraborty shared a video for the song Puja with a photo of herself in a red saree, netizens started trolling Mimi. The reason for trolling was that there was no sound in the video.

Mimi has responded to that troll. Mimi said, “You’re not picking up the sound, are you? How to get there
Because the whole song is waiting for a few more days. Mimi also said, ‘We have to wait a few more days to hear the full song.’ Later, in another poster, Mimi said that her bid song will be coming on September 24.

And under that photo and video, Mimi’s fans began to praise. In the comment box, Mimi’s fans wrote: Big promotion. You won my heart! However, a netizen called Mimi by the name of Dugga and offered her love. One netizen wrote: ‘How are you Ma Dugga? I love you, I want to love you’. Seeing such comments, Mimi replied again, writing, “We all love Maa Dugga.”

By the way, MP actress Mimi Chakraborty is literally going to work in Bollywood this time if all goes well. She is going to act in a Hindi web series. Instead, as Ali Fazal’s name is heard as a hero, the name of a popular Tollywood actor comes up.

Previously, Swastika Mukhopadhyay, Paoli Dam and Raima Sen worked on Hindi film series. On the other hand, Jesus Sengupta, Shaswat Chattopadhyay, Parambrata Chattopadhyay, Tota Roychowdhury, Rajesh Sharma have done a lot of work in Hindi. Some time ago, Abir Chattopadhyay also worked at the National Platform. News about Raj Chakraborty’s debut in Bollywood has also been heard. Although Mimi Chakraborty has previously acted in the Hindi remake of ‘Poat’, the film is awaiting its release. However, this is the first time he has been offered the lead role in a Hindi web series.

It is heard that Mimi Chakraborty will work under the direction of ‘Gulab Gang’, the famous Bengali director of ‘Mahalaya’, Soumik Sen. Now the question is who will be Mimi’s hero? According to the sources, the talks with Ali Fazal have advanced a step. But the most interesting thing is that: An intellectual and popular actor from Bengali movies will be seen sharing the screen with Mimi. He came from the world of theater and made a name for himself in the cinema in a short time. And he is on the list of favorite actors of all the established directors of Bengal. He is Anirban Bhattacharya.

In Tollywood, Anirban is heard to be another hero of the film. By the way, Anirban has previously worked on ‘Mrs Chatterjee vs Norway’. That Hindi movie has not been released yet. Mimi Chakraborty and Anirban Bhattacharya have worked together before. ‘Sir Dracula’ of the two has been successful in Bengal. Now let’s see if Anirban agrees to work on this Hindi series or not. In that case, this will also be his first serial work in Hindi.

Attempted to contact Mimi Chakraborty to find out about this. The actress-deputy did not want to comment. Anirban Bhattacharya’s face is also closed. But it is heard that the proposal has already gone to the hero. So who is Mimi’s hero in the Hindi web series? That answer will be available very soon.