Pakistan drowning not only in floodwater, but in debt: UN chief TAZAA News 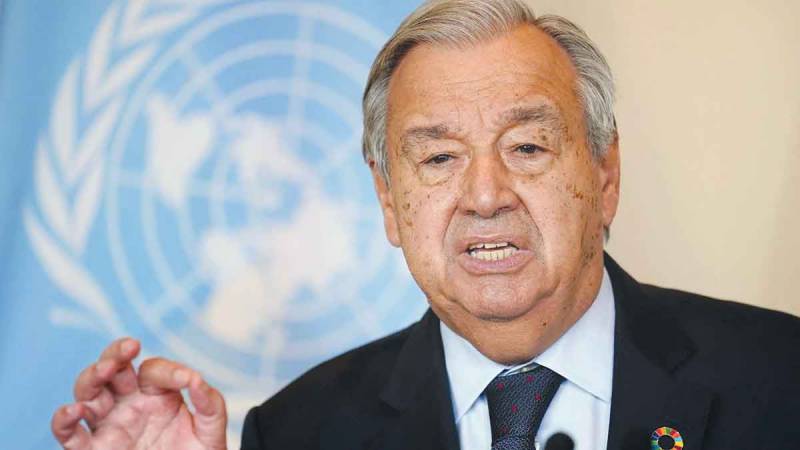 UNITED NATION (NEW YORK) – The United Nations’ annual summit returned in person for the first time in three years on Tuesday, with UN chief Antonio Guterres warning in his opening speech of an upcoming “winter of global discontent” from rising prices, a warming planet and deadly conflicts.

The 77th General Assembly meeting of world leaders convenes under the shadow of Europe’s first major conflict since World War II – Russia’s invasion of Ukraine, which has unleashed a global food crisis and opened fissures among major powers in a way not seen since the Cold War.

Antonio Guterres while inaugurating the High-Level General Debate of the 77th Session of the UN General Assembly in New York urged the developed countries, international financial institutions and fossil fuel companies to come forward to help the developing nations, facing the worst climate change devastations, especially in Pakistan. The UN Secretary General said that around 80 percent of the carbon emissions are contributed by G-20 countries, whereas the developing countries make a minor contribution in this regard, but bear the brutal impact of the climate change.

UN Secretary-General Antonio Guterres Tuesday highlighted the huge destruction wrought by climate change, saying he himself saw it in Pakistan, where, he said, one-third of the country was submerged by a “monsoon on steroids”.

“We have a rendezvous with climate disaster,” the UN chief said as he opened the General Assembly high-level debate in the iconic hall of the 193-member body. Arrayed in front of him were world leaders, including Prime Minister Shehbaz Sharif.

“Planet earth is a victim of scorched earth policies,” he said, noting that Europe saw the worst heatwave since the Middle-Ages, mega-drought in China, the United States and beyond. “Famine stalking the Horn of Africa,” Guterres said, exposing one million species at risk of extinction.

“Once-in-a-lifetime climate shocks may soon become once a year events,” he told delegates from around the world. “And with every climate disaster, we know that women and girls are the most affected.” Referring to the acute economic situation of the developing countries, including that of Pakistan, the UN chief called for debt relief.

“The Debt Service Suspension Initiative should be extended – and enhanced. We also need an effective mechanism of debt relief for developing countries – including middle income countries – in debt distress. Creditors should consider debt reduction mechanisms such as debt-climate adaptation swaps.

“These could have saved lives and livelihoods in Pakistan, which is drowning not only in floodwater, but in debt,” he told the General Assembly.

“Lending criteria should go beyond Gross Domestic Product and include all the dimensions of vulnerability that affect developing countries,” he said.

Antonio Guterres said he himself witnessed the devastation caused by recent rains and floods in Pakistan.

He said the climate change crisis is a case study for moral and economic injustice, being done to the developing world.

The UN Secretary General said the present-day world is facing multiple crises, including food security, climate change, and higher prices of agricultural inputs. Talking about geo-political divide in the world, Antonio Guterres said, dialogue is the only option to resolve conflicts in the world, which needs collected efforts as no single power can call the shots. The UN Secretary General said negative propaganda on the digital platforms is also creating problems in the society.

The UN chief accused energy giants of “feasting on hundreds of billions of dollars in subsidies and windfall profits while household budgets shrink and our planet burns.”

Guterres’ comments, at the UN General Assembly in New York, come on the heels of a European Union proposal to introduce a windfall tax on oil, gas and coal companies, many of which have reported record-high profits as Russia’s war in Ukraine and An energy crunch sent prices soaring. The European Commission is proposing that EU states take a 33% share of the companies’ surplus profits. The United Kingdom introduced a 25% windfall tax earlier this year to provide relief for people struggling with their energy bills, but newly installed Prime Minister Liz Truss has said she won’t extend it to pay for a much bigger program of subsidies this winter and next. . US President Joe Biden’s administration mulled the idea in the summer but it gained little momentum.

“Today, I am calling on all developed economies to tax the windfall profits of fossil fuel companies,” Guterres told the Assembly. “Those funds should be redirected in two ways: to countries suffering loss and damage caused by the climate crisis, and to people struggling with rising food and energy prices.”

His comments also come as parts of the world are battered by extreme weather events supercharged by the human-induced climate crisis. More than 1,500 people died in Pakistan over three months of extreme monsoon rain that scientists have linked to climate change. More than 300 people have died in floods in Nigeria this year, disaster management authorities there say.

Typhoons and hurricanes have brought floods to Puerto Rico, the Dominican Republic and Japan this week. Drought is affecting vast swathes of the United States, China and Europe.

Guterres warned that a “winter of global discontent is on the horizon,” with inequality “exploding” and the cost-of-living crisis “raging” while the planet burns.

“We need to hold fossil fuel companies and their enablers to account,” he added. “That includes the banks, private equity, asset managers and other financial institutions that continue to invest and underwrite carbon pollution.”

The UN General Assembly is likely to be dominated by Russia’s war in Ukraine. The climate crisis, nevertheless, will be unavoidable, intersecting with several issues on the agenda, including energy and food security. “The climate crisis is the defining issue of our time,” Guterres said. “And it must be the first priority of every government and multilateral organization. And yet climate action is being put on the back burner – despite overwhelming public support around the world.

73rd Founding Anniversary of the People’s Republic of ChinaTAZAA News

73rd Founding Anniversary of the People’s Republic of ChinaTAZAA News