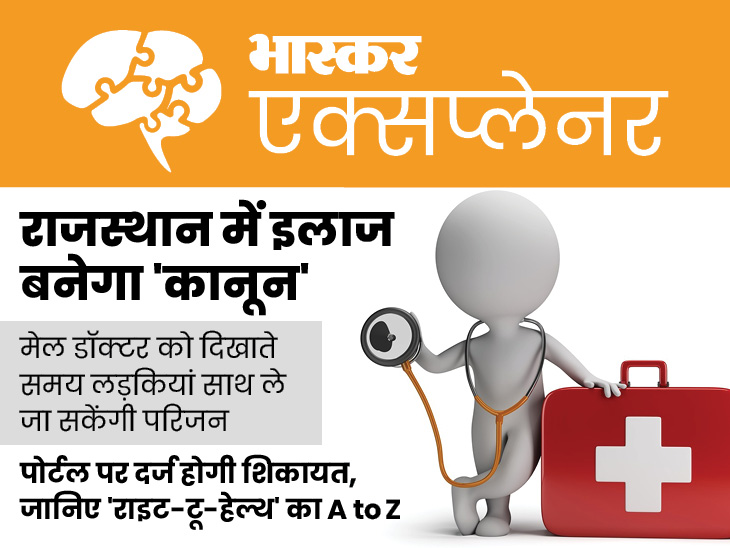 Today the Gehlot government of Rajasthan will get the ‘RIGHT TO HEALTH’ bill passed in the assembly. Rajasthan will become the first state in the country to give the right to health to more than 8 crore people of its state. After passing this bill and becoming a law, every citizen of the state will get the right to health legally. The government has described it as the Rajasthan model of public health. Which will usher in the era of advanced public health.

8.1 crore population will get the right to health

Under Part (3) of Article 207 of the Indian Constitution, the Rajasthan Right to Health Bill-2022 has been placed in the House by the Minister-in-Charge Parsadilal Meena on the recommendation of the Governor. The Gehlot government had announced this bill in the number 9 of the budget speech for the year 2021-22. In this, 14 crore 55 lakh rupees can be spent every year. In this, a provision of Rs 14 crore 50 lakh has been made for human resources, Rs 5 lakh for allowances of State Health Authority and District Health Authority members. Expenses may increase over time.

The ‘RIGHT TO HEALTH’ bill will be passed in the Rajasthan Assembly today.

Right to Health will cover it all

Right to health will give protection of treatment to the health of the people of the state during the epidemic.

It includes all types of government and private institutions, facilities, buildings, places or parts thereof.

This will include law, policy, program, project, technology, identification, prediction, analysis and evaluation of harmful activities, coordination of procedures, methods and means for mitigating potential impacts.

Treatment costs, risks, benefits, options have also been included in this.

People will get this in Right to Health

In Right to Health, every person of Rajasthan will be able to get a better idea about the diagnosis, investigation, treatment, future results and possible complications and expected expenses of the disease.

– Through the rules made under the Act, out door patients (OPD), indoor recruitment patients, doctor’s visit and consultation, medicines, diagnosis, emergency transportation i.e. ambulance facility, procedures and services, emergency treatment will be available.

– The patient will get complete information about the nature of the disease, causes, actual diagnosis, care, treatment and expected results, possible complications and expected expenses.

Patients will be given free treatment by all public health institutions according to their medical care level.

If there is a medico-legal case, the health care provider will not delay the treatment merely on the basis of the police’s NOC or police report.

The patient will have access to documents, test reports, treatment details and part-wise bills.

Consent will have to be taken from the patient or his family after giving prior information about surgery, chemotherapy.

Secrecy, human dignity and privacy will be taken care of during the treatment.

The presence of a woman will be necessary during the physical test of a female patient on behalf of a mail worker.

The patient will be able to select the available alternative treatment method.

Right to get information about rates and taxes of all types of services and facilities.

During the treatment, the sources of taking medicine and testing can be selected.

– The patient will be educated about the condition of health.

Referral transportation facility will be available from all government and private medical institutions.

In case of a patient leaving the hospital or treatment center against the advice of the doctor, the details of the treatment can be obtained.

To get second opinion, the right to get treatment details and information from the health provider already doing treatment.

Rajasthan government will be bound to make proper provision in the budget for Right to Health.

The government will incorporate treatment quality and safety measurements and norms.

– Nothing can be denied directly or indirectly from the Guaranteed Services.

Coordination will be done between government departments for providing adequate and safe food for nutrition, provision of safe drinking water, hygiene.

Grievance redressal system will be developed

The government will create a complaint redressal system within 6 months from the date of commencement of the Act.

The web portal, help center will send the complaints to the concerned officer or observer within 24 hours.

The concerned officer will respond to the complainant within the next 24 hours.

If the complaint is not resolved by the officer within 24 hours, then the complaint will be immediately forwarded to the District Health Authority.

State health authority will be formed

State Health Authority will be formed in Rajasthan. In which an IAS officer of the rank of Joint Secretary or above will be the Chairman. The health director will be the member secretary. While the Medical Education Commissioner, Joint CEO of Rajasthan State Health Assurance Agency, Director of Ayurveda, Director of Homeopathy, Director of Unani will be ex-officio members. Two people nominated by the government who have knowledge of public health and hospital management will be members. All the members other than the postgen member will be appointed for 3 years. There will be a meeting of the Health Authority at least once in 6 months. To meet twice a year.

District Health Authority will be formed in every district

– The Authority may call any person for inquiry or information. That person will be bound to present legal information.

– The Authority or any other officer authorized by it may enter into any such building or place. Where the State Health Authority, the District Health Authority is confident of having received documents relating to any subject. He may take any such document or take notes and copies thereof.

If any person knowingly contravenes the rules of the Act, then for the first time breaking the rule will attract a fine of Rs.10 thousand.

For the second or subsequent violation, a fine of up to Rs 25,000 will be imposed.

Even civil courts will not be able to proceed

There will be no legal action or case against the officer-employee of the authority.

There shall be no case, prosecution or legal proceedings against the Government of Rajasthan, State Health Authority, Chairman of the District Health Authority, members or officers of the Committee of the Authority for anything done in good faith.