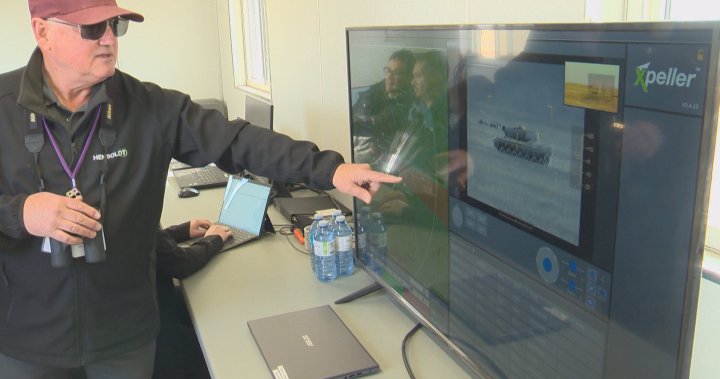 Canada’s military keeps an eye on the skies as it tries to cope with rapidly advancing technology.

“It’s so easy for anyone to use a drone these days, so they’re becoming a part of our modern world that we have to be conscious of,” said Jared Giesbrecht, a defense scientist at Defense Research and Development Canada.

Commonly known as drones, uncrewed aerial systems (UAS) are the focus of the latest sandbox of the Innovation for Defense Excellence and Security (IDEAS) program, where companies will demonstrate their progress in detecting, tracking and defeating small, commercial UAS.

Despite UK reports, the British Army says a training base near Medicine Hat will remain open

The IDEaS program is designed to improve the Department of National Defence’s access to the creative potential of Canadian innovators.

Businesses from Canada, Germany and Australia are based at Canadian Forces Base Suffield, offering both non-kinetic solutions such as physically disabling drones and radio frequency signal jamming.

“It’s really good to exchange with the different scientists here attending the event,” said Bernd Burger, sales director with Hensolt Sensors, one of the companies participating in the sandbox. “It’s a very good week for us to learn and test.”

“It’s very agile in our ability to understand the threat and how it can be used,” said Major Raymond Green with Canadian Joint Operations Command.

A counter UAS sandbox was also held at CFB Suffield in 2019.

As technology advances, experts believe the safety risks associated with drones will change along with it.

“Their speed and radio range increase every year and thus efficiency continues to improve, so we need to continue to work on solutions as they both evolve step by step,” Giesbrecht said.

Members of the Canadian Forces believe the current work is encouraging.

“It’s a multiplier effect, the systems we’re looking at,” Green said. “Advances in technology… enable the warfighter to do their job more effectively and reduce collateral damage in the process.”

The knowledge sharing exercise will continue for another week.

1:59
Farmers are taking to the skies with drone technology

Farmers are taking to the skies with drone technology – March 16, 2022