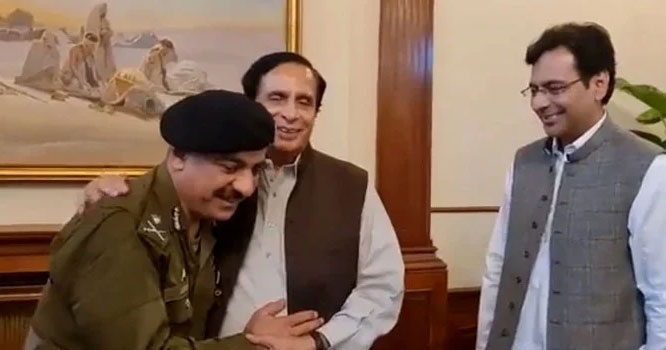 Tug of War: Centre, Punjab dispute over CCPO transfer intensifies. The dispute between the Center and the provincial government has intensified over the transfer of Lahore’s Central City Police Officer (CCPO) as Punjab Chief Minister. Chaudhary Parvez Elahi It clarified that no official from Punjab can be removed illegally without the permission of the provincial government.

Elahi said this at a police conference held at the Civil Secretariat’s Durbar Hall on Wednesday, a day after the federal government asked Lahore CCPO Ghulam Mehmood Dogar to step down.

Sources said the PML-N government was angry over the registration of a case against its MNA Javed Latif, for which the CCPO should be held responsible. But the CM asked to continue the CCPO.

“We will improve residential facilities for officers in the Government Officers’ Residence (GOR). Dwellings in GOR will be downsized and apartments will be constructed as many dwellings in GOR have eight canals. We will set up 150 police patrol posts and the special police force will be granted a special pay package in rural areas.

He said that bunkers will be built in rural areas and the government will provide bullet-proof vehicles, bullet-proof jackets and special trackers in police vehicles.

Besides, CM Elahi disclosed that police officers with law degrees will be replaced as investigating officers as the police are in danger of losing the case due to weak investigation. He said that the government is providing new vehicles to the police. He said that three copies of FIRs should be sent to the concerned CM Monitoring Cell, DIG and SSP for monitoring.

The Chief Minister said the government is considering setting up a force comprising retired army commandos for rural areas, aimed at providing support and relief to the police.

Elahi said that it is the duty of the police to deal with the complaints of every applicant without discrimination and to ensure speedy justice for the common man at the police stations. He emphasized that whenever the common man’s attitude towards the police changes, then the police culture will change. He said that the investigation process should be improved and made efficient so that criminals do not escape punishment.

Elahi paid tribute to police officers and other officials for maintaining law and order during Muharram. He said that he personally supervised the law and order arrangements on the Chehlum of Hazrat Imam Hussain (RA). He congratulated Rahimyar Khan and Rajanpur DPOs for taking action against the criminals.

Meanwhile, Punjab Home Minister Hashim Dogar said that they will review the proposal of providing houses under soft conditions to police officers and personnel.

Inspector General of Police Faisal Shahkar congratulated the Chief Minister for solving the police problems. He assured that the police will not take any action to protect the lives and properties of the people.

Additional IGP South Punjab said: “We will come to the confidence of the CM.”